One of my favorite restaurants in the world is L’Atelier de Joel Robuchon in Paris. One of the principal reasons for that opinion is the mashed potatoes, which are heaven on a plate. I’m not sure what makes them so good – perfect seasoning, a silky texture like a cloud, or maybe it’s all that buttery, creamy goodness? Either way, they definitely rank way up there on my list of favorites. I have the recipe for those potatoes, and just can’t go there. A restaurant kitchen has an army of commis chefs to do all that peeling, mashing, and, most important, smashing through a strainer, to obtain just the right texture. Yeah, it would probably take my army of one about a week to achieve the same results. 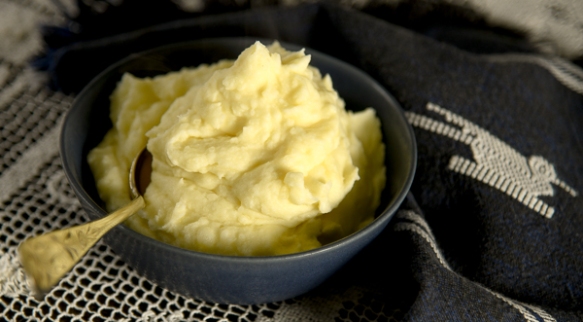 Fortunately we have a solution. In 2004, Chef Anthony Bourdain wrote a French cookbook, Anthony Bourdain’s Les Halles Cookbook: Strategies, Recipes, and Techniques of Classic Bistro Cooking,containing French bistro recipes from the New York restaurant of the same name, where he was executive chef for several years. This saucy little book is Bourdain’s personality in print. But more importantly, the recipe for Pommes Pureé in the Les Hallesbook is the closest I’ve found to Robuchon’s potatoes, without all that work.

I followed Anthony Bourdain for almost his entire career – read his books and watched the television shows. I always liked the fact that he was a renegade in the food world. Then, when I bought the Les Hallesbook and made a few of the recipes, I realized that not only was he a great entertainer, but that he had some serious chef creds as well. Anthony Bourdain’s passing was a huge loss for the culinary world. The world will never know what would have been his next food adventure 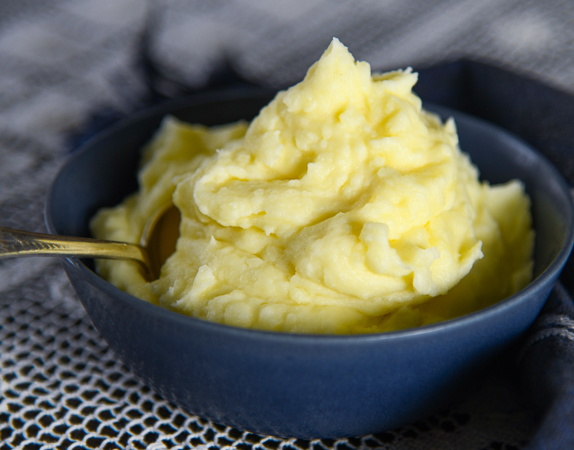 Do not fear the fat in this recipe. If you are concerned about it, just eat less.  If you really love mashed potatoes, this recipe may yield only 8, or even 6, servings.  We love them too, but we have found that the richness of the dish makes it stretch a lot further than the 6 servings in the original recipe.

6 Idaho Potatoes, peeled and cut in half lengthwise

Place the potatoes in a large pot with enough cold water to cover them. Add the salt and bring to a boil. Boil the potatoes for about 15 minutes, or until easily pierced with a knife.

Meanwhile, while the potatoes are cooking, combine the cream and the butter in a small saucepan and bring to a simmer, just enough to heat the cream and melt and combine the butter.  Cream goes from steaming a little bit to boiling over very easily (I know from personal experience), so keep a close watch on it.

When the potatoes are done, drain them and return to the pot. Mash them with a potato masher, or whatever tool you use for mashing potatoes ¾ricer, fork, etc.  Whatever tool you use, do not put the potatoes in a blender or food processor unless you want to make glue. Mashing the potates really well at this stage, results in fewer lumps in the finished dish. It depends on the effect you are after. Sometimes I like them a little more “rustic.”

Begin adding the cream mixture 1/4-1/2 cup at a time, mixing in well and mashing between additions. The potatoes are done when they are creamy and smooth.  Season with additional salt and pepper to taste.