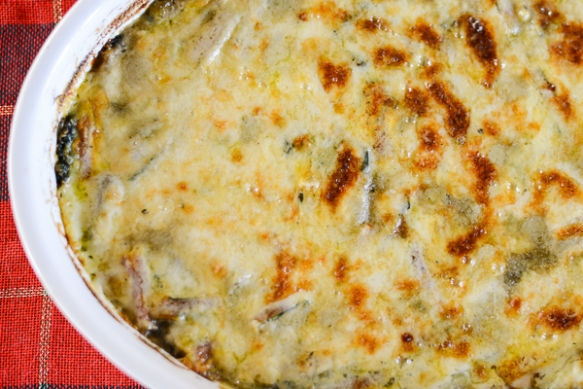 Many years ago, well before I even knew I wanted to go to culinary school, I bought a book called Le Cordon Bleu At Home. It’s a huge book with a series of “lessons” that are supposed to take your cooking from simple to spectacular, Cordon Bleu style. I don’t know about that. Some of the recipes in the first couple of lessons are well above what I would define as beginner level, especially for someone who does not already know how to cook. But I’ve always loved Cordon Bleu cookbooks, for consistently reliable recipes and this one is no different. I make it every year and it has been delicious every time. 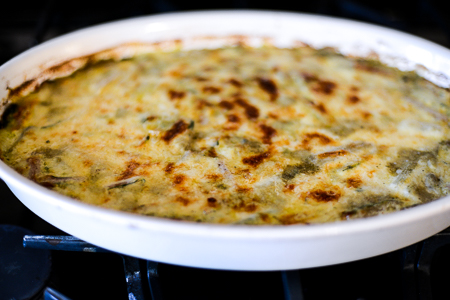 My husband often jokes about my 5-year recipe rotation. He’s right. I love experimenting with food and trying new recipes. However, once in awhile a recipe becomes a keeper, and I end up making it frequently.

This is one of those recipes. I grow chard every year and usually have an abundance of it. I’m always on the look out for a new recipe to take chard to the next level. In this case, chard leaves and stems are first blanched then mixed with a creamy béchamel sauce, topped with cheese, and baked until golden and bubbly. Yum, yum, yum!

I like to use rainbow chard for this recipe, but any chard will do. You could probably use kale if you prefer. I use a large oval 10-by-15 gratin dish for this, but you can also use a regular 9-by-13 dish. The recipe makes a lot, but it freezes well, so don’t worry about the leftovers.

Preheat the oven to 425. Butter the dish you plan to use for the gratin.

Heat 2 tablespoons of the butter in a frying pan over high heat. Add the sliced mushrooms and cook until they release their liquid and it has evaporated. Season to taste with salt and pepper. Add 1/4 cup crème fraiche and cook until slightly thickened. Remove from the heat and set aside.

Melt the remaining 2 tablespoons butter in a saucepan over medium heat. Add the flour and stir to make a thick paste. Slowly add the milk a splash at a time, whisking the mixture after each addition. Add salt, pepper, and the nutmeg, and cook the béchamel sauce until it coats the back of a wooden spoon. Remove from the heat and whisk in the remaining 1/2 cup crème fraiche.

Squeeze as much water out of the chard as possible, roughly chop it and place in a bowl with one half of the béchamel sauce. Taste and adjust seasoning if necessary.

This site uses Akismet to reduce spam. Learn how your comment data is processed.