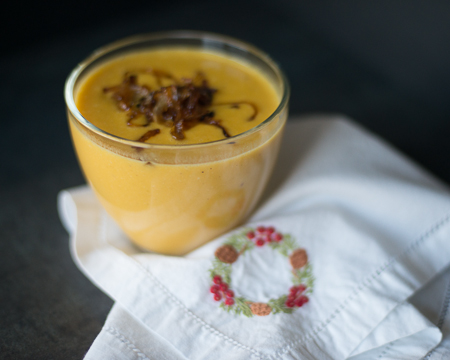 Happy New Year! In years past, this would be the time that I would be anticipating the wintery, dark, diet days of January that I would soon abandon in favor of what I refer to as “chocolate season” in February. I absolutely hate the word diet — so much deprivation! So, this year I’ve decided to take a different approach. Rather than a long list of resolutions, I’ve decided to follow Michael Pollan’s advice from his book, Food Rules — An Eaters Manual. “Eat food. Not too much. Mostly plants.” That’s it — simple, really.

I started Jeannine’s Cuisine in October of 2014 as a way to provide copies of my recipes to friends and family who were always asking for them. Since I started the blog, I’ve often asked myself if I should have some sort of theme — Mediterranean? gluten free? Paleo/Primal? Pastry? Then I realized that Jeannine’s Cuisine is all of that. It’s the way I eat, which encompasses a huge variety. But, in spite of my “everything in moderation” stance, there are still a few “rules” I go by for both this blog and the way we cook and eat.

Let me just put it up front – I love pastry. Of course, I do — I’m a former French-trained pastry chef. But, I seriously believe that sugar consumption is probably at the root of America’s obesity problem, and reading as much about nutrition as I do, I can’t recall EVER coming across anything that said it was good for you. Yes, I do some baking, and you will continue to see some baking recipes on the blog in the upcoming year, but, at least until February (smile), in limited quantities. It is January, after all. I tend to bake things I can freeze, then thaw one piece of whatever it is at a time. It keeps my sweets consumption in check, but still allows me the occasional treat with my afternoon tea, or even breakfast.

Another big part of Jeannine’s Cuisine that will continue in the New Year is to use/eat as little processed food as possible. I’d absolutely love to be one of those homemakers I read about who put up vegetables every fall and bake artisan bread every week. Unfortunately, I have something called a full time job that prevents that, but I can try. Yes, it’s a lot of work to do the cooking I do. I spend a LOT of time in the kitchen, but it’s so worth it when my husband beams when he has a spoonful of a delicious soup that I’ve just made from scratch. 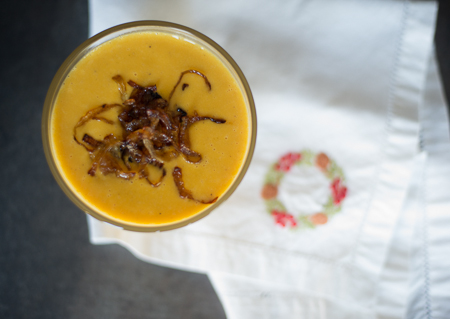 This butternut squash soup is one of his favorites. Mine too, for that matter. If you have a Vitamix or other high- speed blender, it will turn your soup into velvety goodness. If not, you can still get the same smoothness, it will just be a bit more work. Either way, as we look forward to the wintery, dark, no dieting days of January, we know we can stay warm inside with a delicious, good-for-you bowl of soup. Spring is a long way off. Stay warm my friends. Let’s make some soup!

We used beef tallow for caramelizing the onions, but realize most people don’t keep tallow in stock. Bacon grease, butter or even some sort of mild oil will work as well, but you will need to adjust the heat on the onions accordingly to allow them to brown without burning the fat.

Halve the sweet onions lengthwise and thinly slice. Melt the fat in a frying pan and cook the onions on medium heat or lower, stirring frequently, until golden brown. Place the onions on a paper-towel lined plate and set aside.

Melt the butter in a large dutch oven over medium heat. Add the onions and sauté until soft, 4-5 minutes. Stir in the broth, squash, pears, thyme, salt, pepper and coriander. Bring to a boil, reduce to a simmer and cook until the squash is tender, approximately 15 minutes.

Puree the soup in a blender in batches, pouring it into a bowl after each batch. If you do not have a high-speed blender such as a Vitamix, after blending the soup, pour it through a fine strainer into a bowl, scraping it as necessary. After all the soup is blended, return it to the pot. Stir in the cream and reheat the soup, stirring frequently. Ladle into bowls and garnish each with a spoonful of the caramelized onions.

This site uses Akismet to reduce spam. Learn how your comment data is processed.